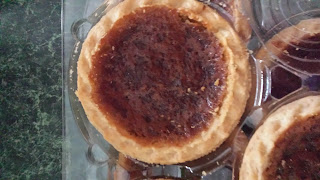 Why I regret buying these butter tarts

It’s not what you think.  It’s not that I regret buying a treat that I know isn’t totally awesome for my body, nope it’s because these butter tarts are deceptive.  They look like they’re the real deal.  They look tasty.  The font on the front of the box reminded me of another company (not a baking company), that makes authentic potato chips and I transferred my trust from that company over to this box.  Because of the way the box looks.   But as it turns out, these are not real butter tarts. What do I mean by real? I mean authentic.  What do I mean by authentic? I mean ingredients authentic to the original recipe.  Period.  No modified smodified shortening aka fake butter. Butter tarts means “butter” is actually on the ingredient list.  Like the first or second ingredient on the ingredients list.   Let me back up.

I don’t buy a lot of treats and sweets for my household, but I’ll buy one every other week.  The other day I was shopping with my boys and we picked up some brownies – ones that are made with real butter and cocoa.  I saw these butter tarts advertised on sale.  It’s been a good while since I’ve treated myself to a butter tart, and I decided that I deserved one that night.  I know my boys don’t like them and I didn’t want the pressure of having to eat an entire box to myself, but I reasoned that at the sale price it would be ok if I enjoyed half the box before they expired.  So I put them in the cart and brought them home.  As I prepped and cooked dinner I was salivating thinking about these butter tarts.  Yes I realize that I’m a grown up and I could have just eaten one in the truck on the way home or as soon as I got all my groceries unpacked and put away.  But I was waiting to have it for my dessert.  My indulgence, my reward for a job well done, a good day.

I couldn’t stop thinking about them, I even went lighter on my dinner, knowing that I was gonna eat one of those delicious looking butter tarts afterwards.  When the time to eat one finally arrived I couldn’t stand the wait any longer.  I opened the wrapping and the box.  I took one out and took a bite, and I immediately knew I had been duped.  THESE AREN’T BUTTER TARTS! THESE ARE IMPOSTER BUTTER TARTS!!!  I wanted to throw it in the garbage, but for some reason unknown to me at the time, I kept eating it, more and more dissatisfied with each bite, feeling the tension rise.   Then I needed to check the ingredient list, to confirm what my taste buds already knew.   I realized I felt that I MUST eat it because I paid good money for it, and afterall, I waited to enjoy this treat.  But I wasn’t enjoying it.  Not one bit.  Each time I took another bite I was expecting something different.  Like somehow it would magically turn itself into the thing I was expecting.  Didn’t happen.

I finally took the disappointing imposter butter tart out of my hand and threw it in the garbage.   The box with the rest of the phony butter tarts sat on my counter for days.  I want to give the rest away, but I realize I couldn’t.  There’s this part of me that feels like I’m not being authentic by giving this ‘phoney’ treat away....like ‘here, I think these are crap, but maybe you can’t tell’.   And maybe the person I’d give them too doesn’t have the hyper sensitive palate I do, maybe they don’t care?  But I do.  These aren’t real ingredients, and I can’t give anyone I care about crummy ingredients that I instinctively know is the really bad stuff to put in your body.  Your body knows the truth, your body would rather you eat REAL BUTTER with SUGAR instead of modified shortening – aka imitation lard.  It’s not the same, it’s not even close.

Go ahead and google up the history of margarine and modified shortening.   And you know, a lot of pizza chains use this same ingredient to make their extremely cheap pizzas – the dough AND the cheese.  Yup, same ingredient to create different phoney foods.  Great job modern day humanity;  let’s make fake ingredients just so we can make cheap imitation foods.  My kids have plastic fake foods to play with, and I don’t even let them put those in their mouths!  And, I’m done with cheap.  I’d rather have paid 3 times what I paid for the imitation butter tarts for the real thing. If I had done that, I would have enjoyed them.  You get what you pay for and the truth is, you are what you eat.  This lady is all authentic and doesn’t like imposters...growing up, there was the name ‘poser’ given to something or someone pretending to be something or someone it wasn’t...so give me the real thing or throw it in the garbage.

I ended up throwing the imitation butter tarts in the garbage, before the expiry date.  And I’m pretty happy with myself for doing that; a younger version of me might have attempted to eat another one, or let them sit on the counter until the expiry date, or given it to someone else, because I severely dislike wasting perfectly good food.  But the wiser me knows that this food wasn’t made with edible ingredients.  So it belongs in the garbage.   And before you start sending me emails or post comments about being grateful for things I’m just going to say to stop yourself.  Conversely, if you are ever gifted any kind of food by me, you will know that it’s REAL food, something I would eat myself, feed to my children, because I care about what goes in.
Posted by Unknown at 09:33 No comments: